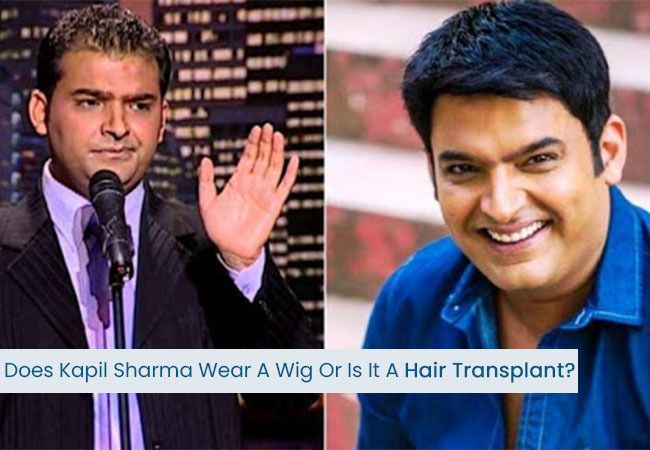 Anyone who has been keeping an eye on the Indian Television programmes for the past few years, has undoubtedly known Kapil Sharma. The smiling face and the family comedy series, “The Kapil Sharma Show”, has made him a household name. And for someone who appears on millions of TV sets across Indian households, has to look his best always.

As much as he is known for his satire and jokes, he is also known for his charming good looks and people are well aware of the simple, yet classy Kapil Sharma hair style. It adds much grace to his overall personality. Born and brought up in Punjab in a middle class family, Kapil is an alumnus of Apeejay College of Fine Arts in Jalandhar.

A close knit family and the interest in performing arts, combined with hard work has brought him to a platform, where people wait for his show every night. With such popularity, especially in a visual medium, comes the responsibility of putting up the best appearance. And at such a time, he started to face hair loss and the Kapil Sharma hair fall became the talk of the town.

In an industry, where looks matter a lot and in a scenario where you have multiple shows happening along with a daily TV show, Kapil needed to do something to control the damage caused by headlines like “Kapil Sharma bald”. And that is when he opted to go for a permanent cure in the form of a hair transplant.

While the news of the Kapil Sharma hair transplant was never officially confirmed, medical experts in the field were confident of the same. If you see the images of Kapil Sharma before hair transplant, it is quite evident that he was suffering from male pattern baldness, which is quite a common affliction for men, beyond a certain age.

Here is what you need to know. Male pattern baldness is amongst the most common forms of hair loss faced by men and sometimes even women. And yes, it is possible to get rid of it in a permanent manner with Hair Transplant. It is possible to reverse the effects of permanent hair fall like it happened in the case of Kapil Sharma hair fall.

Most men feel that once they lose their hair, it is irreversible and they have to live with it and the lack of confidence that comes with going bald. Our society is at times unforgiving or very shallow. When ‘Kapil Sharma bald’ began to hit headlines, even the comedy king couldn’t resist the hit to confidence. But the Kapil Sharma hair transplant is a good example of the fact that this need not be the case. If you visit the right surgeon and get help at the proper time, you can get back your natural, healthy mane just like the new and slick Kapil Sharma hair.

If you take a look at any photo of Kapil Sharma before hair transplant, it is easy to see that he had thinning hair from the middle part of his scalp. This is pretty common amongst men as they tend to lose more hair with age, as compared to the regrowth. Many times, people completely shave off their head to hide such hair loss. But with guidance from a qualified surgeon, this drastic step may not be required. Instead, you can get a good result with your hair transplant treatment. Kapil Sharma hair style is now aspiring many men to take a step into hair transplant world.

Still Wondering where to get a hair transplant procedure done?

As the saying goes, where there is a will, there is a way. India is seeing an increase in the number of qualified plastic surgeons performing the hair transplant procedure. Dr. Sunil Arora from ALCS is one such trusted name, who has helped thousands to get back their hair. So, if you are looking at a dramatic revival like Kapil Sharma hair, Dr. Arora is your best bet.

Getting a good result at an extremely affordable cost and in a city like Jaipur is now very much a possibility and you just need to visit ALCS for the consultation. It is important to remember that only a certified surgeon can perform the hair transplant as it is a surgical procedure like any other medical procedure.

Also, not everyone is a good candidate for all types of procedures. And a good surgeon will guide you on the one best suited for your specific case. Hence, take care while choosing the right surgeon as the hair transplant treatment will have a permanent impact on your appearance.